Your guide to... Notting Hill

A melting pot of multiculturalism with large West Indian and Portuguese communities, the home of one of London’s busiest markets and the backdrop for world’s second largest carnival, Notting Hill is without a doubt one of London’s most lively and iconic areas.

Far more than just the backdrop for Hugh Grant and Julia Roberts’ blossoming romance in the eponymous film, Notting Hill has a lot going for it. Having been transformed over the past 50 years from a densely populated area of deprivation to one of the city’s most sought after postcodes, this wealthy pocket of London boasts everything from Michelin-starred restaurants and live music venues to quaint bookshops and laidback cafes. Add to that beautiful terraced houses and peaceful communal gardens and it’s no surprise SpareRoom frequently has 500+ ads for rooms in the area.

With seemingly endless things to do and an unforgettable annual street party, there’s never a dull moment in Notting Hill. Read on for our guide to W11’s best spots… 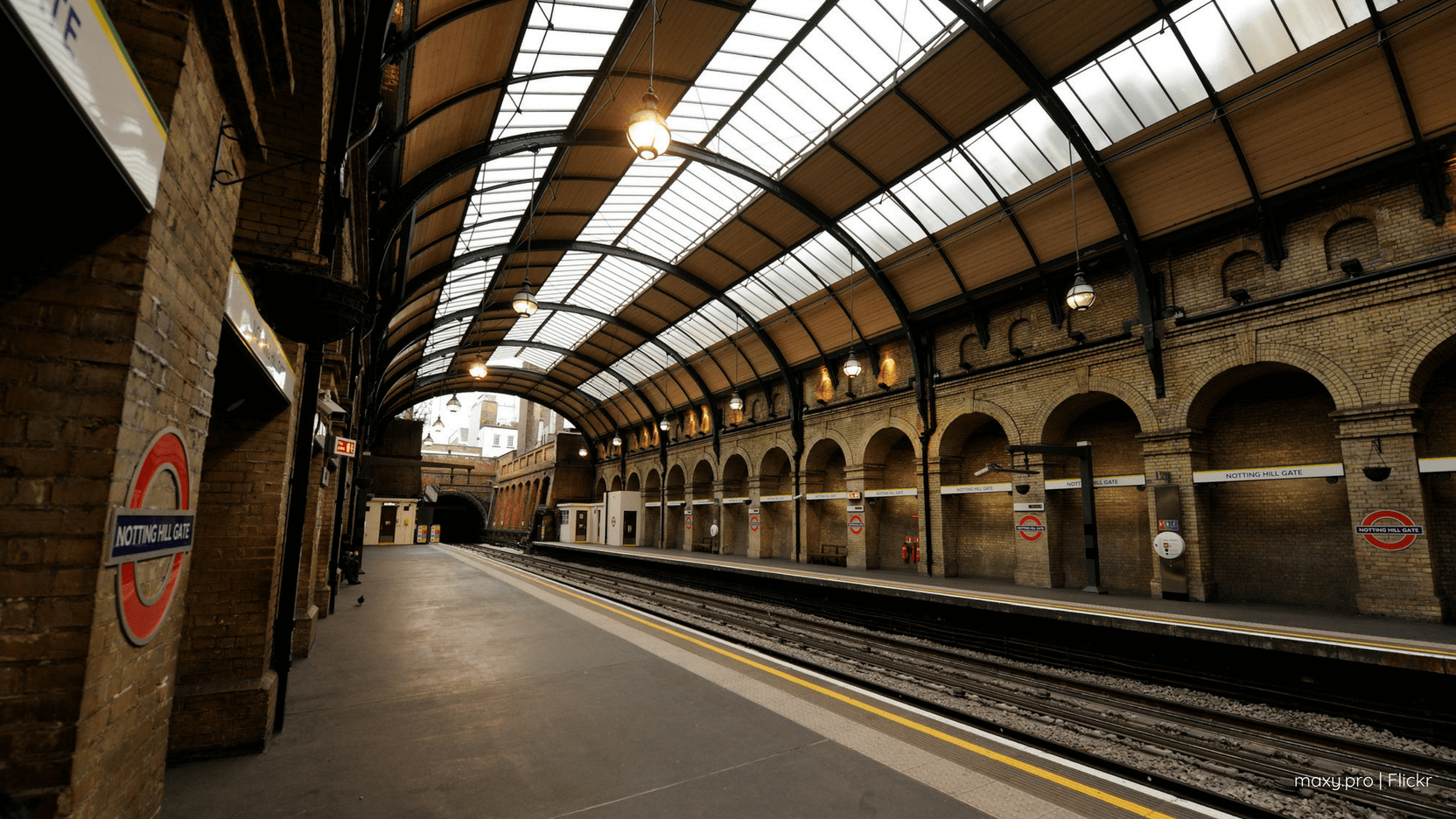 Sitting comfortably on not only the District and Circle lines, but also the all-important Central line, Notting Hill is about as well connected as can be. With a tube journey to Paddington taking just three minutes (!!!) and Liverpool Street less than a 20 minute ride away, Notting Hill is pretty much the perfect postcode for commuters. What’s more, the Heathrow Express runs from Paddington taking you straight to London’s largest airport in just 15 minutes - hee-llooo weekend getaway!

As for buses, you’re spoilt for choice. Seven routes serve the area, taking you all the way from Camden in the North to Chiswick in the West, making day trips around the city a walk in the park (or ride on the bus…). 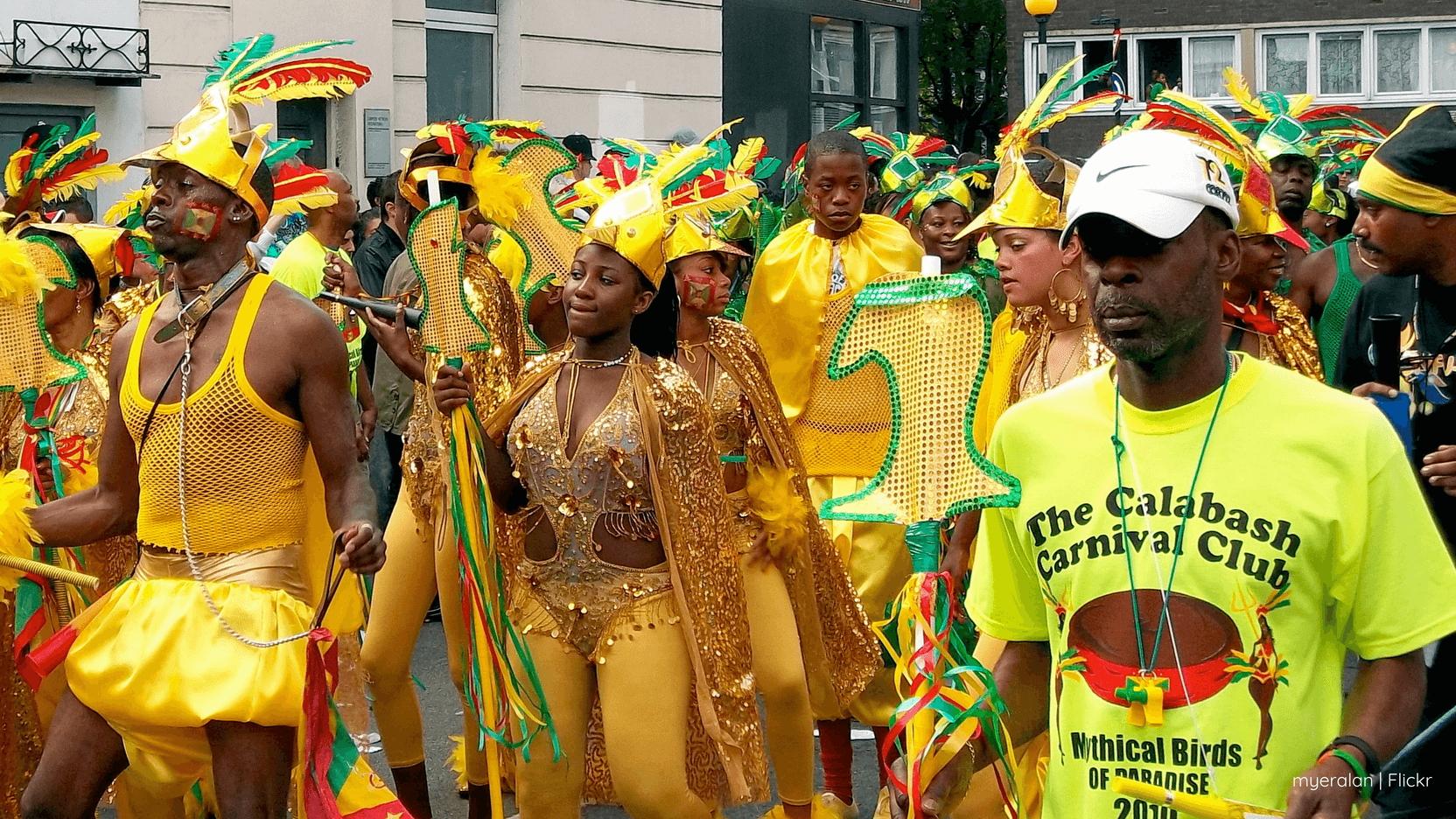 With over 1000 dealers setting up shop every weekend at Portobello Market, this 940m stretch of colours, sounds and smells is London’s largest antique market and not to be missed. Visit early on a Friday or Saturday morning to avoid the crowds and wander the streets for quirky nick-nacks, delicious street food and cool vintage wares. When it all gets too much, head to the hidden gem that is Acklam Village Market for live music and some of the best organic street food this side of the river.

Film buffs are spoilt for choice in Notting Hill. Escape the Portobello crowds and take a (very plush) seat at one of the country’s oldest cinemas, The Electric. Kitted out with leather armchairs, cashmere blankets and table service straight to your seat, this is big-screen viewing in style. Those after cult and indie flicks should head to Grade II listed corner cinema The Gate, the perfect place to while away a rainy afternoon.

Take a trip to The Tabernacle and you'd be forgiven for thinking you’d just stepped into church - probably because it used to be one. Today the red brick, tower-and-steeple clad building is West London’s #1 arts centre showcasing everything from comedy and burlesque to community events and art exhibitions, with a top notch restaurant thrown in. Don’t miss its riotous alternative Christmas pantomime, which claims the likes of Lily Allen and Tom Hollander as previous cast members.

And if there’s one place to be this August Bank Holiday, it’s Notting Hill Carnival. Beginning in 1966 as a way of soothing race relations between British and Caribbean communities, the carnival today is a huge affair attracting attracting 2 million visitors annually. With a MASSIVE parade at its heart, as well as 10 steel pan bands and 70 performing stages, you can expect stunning costumes, calypso music and jerk chicken aplenty. The best way to do it? Grab a Red Stripe, watch the parade and dance the afternoon away at one of the 37 static sound systems... And then repeat on Monday. 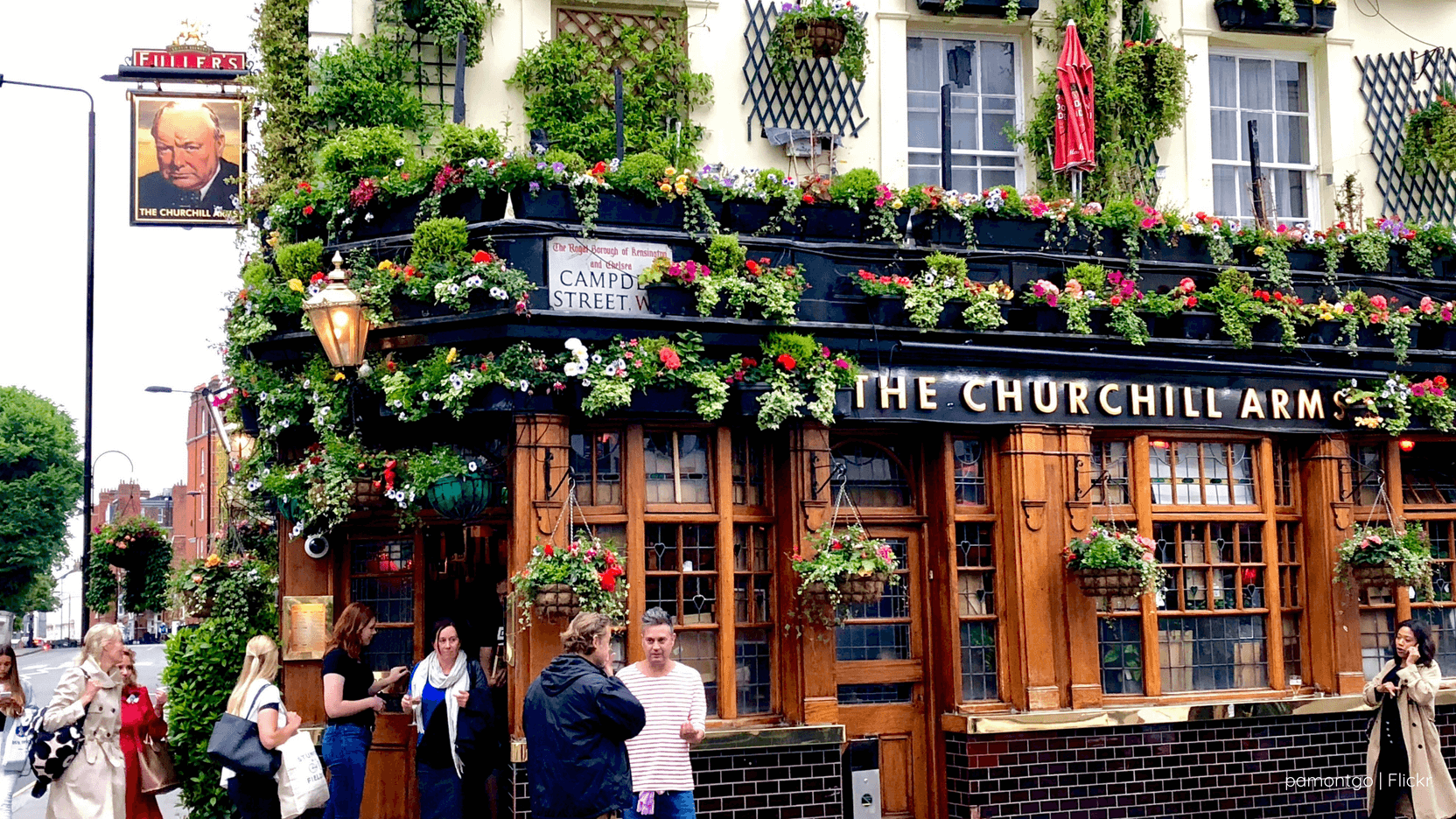 Make like the Made in Chelsea cast and head to light and airy Farmacy for a healthy brunch before a day rifling through the market. Serving up all kinds of vegan delicacies - think sprouted buckwheat granola and ‘earth bowls’ - this is exactly the kind of place to go for a full body detox after a night on the tiles. They even serve juice shots in syringes (A.K.A Instagram gold). For all things egg-based head to the aptly named Eggbreak - expect everything from Mexican omelettes to Turkish eggs as well as other ‘healthy’, ‘naughty’ and ‘bun’-based options.

Quick lunchtime bites of hand stretched pizza and rice filled arancini balls can be found at Arancina (you can’t miss it - it has half an orange Fiat in the window), whilst Cocotte serves up no-fuss spit-roast chicken and smashing salads.

Cravings for Asian food can be sated at The Churchill arms. Perhaps better known for its stunning outdoor flower display and indoor Churchill memorabilia collection than its Thai menu, this pub is a one of London’s most Instagrammable spots. But resist getting your phone out and instead head inside - you’ll be rewarded with mouthwatering pad thais and panang curries.

No-nonsense Fez Mangal in Ladbroke Grove proves that kebabs can be more than just something to scoff down on the night bus post night out. Sit in and sample the likes of their mixed mezze and shish kebabs, or get it to takeaway and eat on the sofa in your pyjamas (you’ll appreciate it a lot more if you’re sober…).

And a spot for date night? Fish lovers should head to Kensington Place, an iconic art-deco brasserie that’s been serving up fish fresh from its adjoining market since 1987, whilst those in search of Greek delicacies can be treated to a Mediterranean feast with a modern twist at Mazi.

Finally, for something a bit different but definitely as tasty, the exposed brickwork, concrete bar and modern British menu of critically acclaimed 108 Garage will stand you in good stead. A former garage (duh), this West London hangout serves up innovative plates in a relaxed setting to the tune of £65 for the set dinner menu - so maybe one best saved for a special occasion. 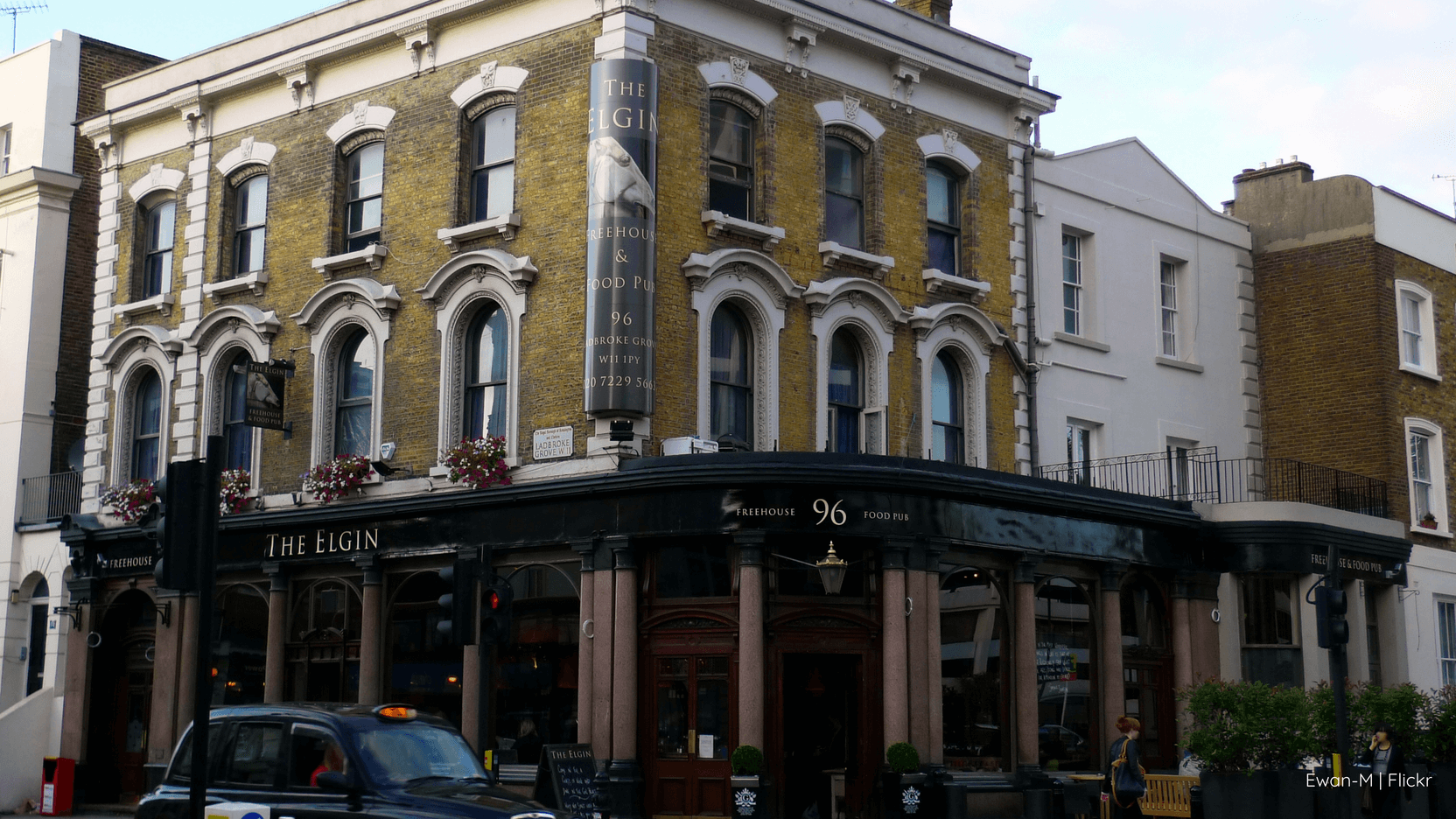 When it comes to pubs in Notting hill you’re spoilt for choice. Boasting a bustling outdoor space come summertime and real wood fireplaces for the winter months, The Elgin is W11’s favourite neighbourhood pub. For a traditional Sunday roast head to the Mall Tavern - it also features a library room and beer cellar, both of which are great private event spaces.

Gin fanatics should head to The Distillery, the four storey home of Portobello Road Dry Gin. Featuring two bars, a hotel, an immersive dining experience and the ‘Ginstitute’ – where you can spend three hours learning about, tasting and creating your own gin - you can be pretty sure of a hangover the next day. More gin-based fun can be had at stripped-back contemporary bar, The Portobello Star which has been serving everyone from beggars to royalty since 1740.

For more cocktails, retro Tiki themed bar Trailer Happiness is your spot - think funky 60s playlists, fresh fruit cocktails and lots of rum. Go with a group and share one of their lethal ‘Zombie’s’ - just make sure you have a cab home booked first.

And the fun doesn’t stop there. Putting on everything from 90s throwback and Drake themed nights to live music gigs, Notting Hill Arts Club serves all your clubbing needs without the need to shlep all the way East. Forget Fabric, it's all about intimate basement settings in the West.

Your guide to… Hammersmith

Your guide to… Putney

Your guide to... Fulham

Your guide to... Shepherd's Bush